I used to be the Ann Landers of Sex 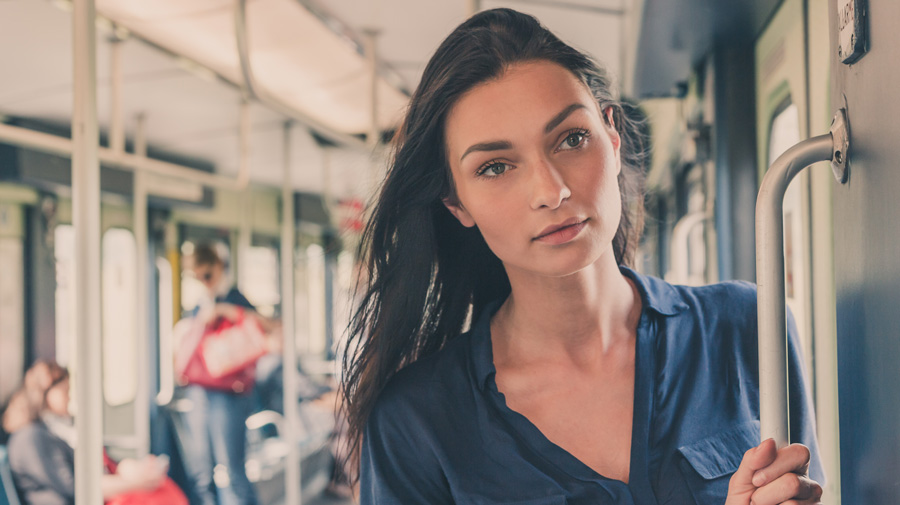 I was on the subway at rush hour recently and it was very crowded. I was standing next to a gorgeous girl and there seemed to be an attraction between us. A huge crowd of people got onto the train and we were pushed against each other. We smiled at each other, I guess acknowledging the embarrassing situation, and we kept making eye contact. We were pressed against one another. It seemed like there was quite a bit of attraction and sexual tension, but I was afraid to come off like a creep and she got off the train without me speaking to her.

I should have talked to her. I know I blew it, but what do I do next time?

Ah, the chance encounter! It can be quite the special adventure, charged with intense sexual excitement. Mmm, what can I say? You blew it.

But I understand why… a crowded subway is probably the hardest place in the world to meet a girl. All the feminine defenses are set to maximum. Mostly because creepy guys ARE constantly trying to cop a feel. But if she was giving you the eye, or any encouragement at all, it sounds like you may have had a chance. In the future, you have to go for it and risk getting rebuffed. You have to say something. Preferably an opener that’s innocuous and non-sexually loaded, something that could be a conversation opener.

Think of something that would best be answered by more than a simple yes or no. As someone who has people trying to chat me up on a fairly frequent basis, the best thing I can say to anyone who wants to start up a conversation with an attractive stranger is to not have too much of your ego invested in this one simple meeting. Don’t act like it’s a big deal to you. Be cool, don’t act nervous, and you shouldn’t come off as creepy. Think of a beautiful stranger as you would a friend, someone you already know and like. No sense of pressure is good.

Once, at an art gallery opening, I noticed an attractive guy. To my delight, he came over and commented on my little eyebrow ring. He mentioned that he had a number of piercings, but none that showed, since he worked as a chef and felt that he had to appear conservative at work. Of course, that made me curious to know where those piercings might be, but I didn’t give that away. At first.

Soon we were deep in conversation and went to a nearby trendy restaurant to continue it. He was amazing … so cool and interesting. We had some wonderful, special appetizers and he ordered some champagne. Pretty suave. The sexual tension was so thick you could have buttered bread with it.

Somehow––who knows how––the conversation turned to sex. He was still cool. He didn’t seem eager or even as if he was anticipating anything. His whole attitude was fresh, easy and free of pressure. We were just two almost-strangers who happened to be talking about incredibly intimate subjects as though it happened every day. I felt as though he didn’t care what happened next. He wasn’t going to be crushed or offended by anything I said to him. He was so easy-going.

We left the restaurant and I was about to say goodnight and head for the subway when he gently and confidently took my arm and steered me in the other direction. He suggested we go to his place. Not something I would normally do, but I was entranced. I couldn’t/wouldn’t say no. Though I distinctly felt that I could have said no at any time and he would have been fine with that, too. I never felt pressured.

I would say the lack of pressure was the key to what happened next. I never felt as though he had an agenda. The whole evening was entirely spontaneous and if I had gone home after dinner, I’m 100% sure that would have been fine with him.

At his beautifully decorated apartment in midtown, he opened another bottle of champagne. We were soon playing around, tickling each other and wrestling around on the floor giggling. He invited me to the bedroom to see his “etchings” and that’s where we stayed for the next five hours. By far, the best five hours of my entire sexual life. (And the stamina that was required is as good a justification as I can come up with for all that running and exercising I do!)

And the things he found to do with that champagne. Of course, there were your typical spills that needed to be licked up, but sometime well into our fourth hour things were getting hot, sticky, and thirsty … alas, the champagne had gone warm. At least, it seemed warm until he impulsively poured it between us as we were making love sitting face to face. The resulting contractions were a jolt to both our systems!

He was so adventurous and it encouraged me to do the most outrageous things! And he was pierced in some pretty interesting places. Sigh. I’ll never forget it. That was a rare night. And I looked forward to the next one!

You never know when a chance encounter might turn into the experience of a lifetime. My advice is to go for it. I was glad I did. I still think fondly of that guy.